Last Night of the Proms raised over a quarter million Rand for charity in September. On Thursday 15 November 2018 Rotary Club of Wynberg (Club / Wynberg) hosted the receiving recipients to a dinner at Palm House Wynberg along with representatives of the various choirs who provide the amazing sounds over the 2 night performance.

END_OF_DOCUMENT_TOKEN_TO_BE_REPLACED

On Saturday 27th July Wynberg Rotary got together with Wynberg Rotaract to paint the passage and one of the bathrooms in the Forensic Medicine Unit of Victoria Hospital, Wynberg.

A fun way to spend a morning: 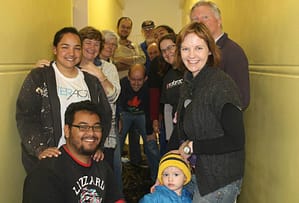 The Teddy Train started with Judy Westwater who grew up in South Africa as a street child in Hillbrow. Judy eventually moved to Inverness, Scotland but always wanted to help the children at risk in South Africa.

Judy met EllieTargett from Hereford through Ellie’s husband Keith, who’s a donor to Judy’s Pegasus Childrens Trust Fund. Through Keith, Ellie has been in friendly communication with Judy.Ellie told Judy that she had her old teddy to give to one of the disadvantaged children in South Africa. Judy suggested she give it to Honour, one of the children in South Africa who was repeatedly raped and physically abused. Honour does not speak since her tragic ordeal and the teddy for her was very special. It was after this gift that Ellie decided to collect teddies in her area and send them to S.A. to support traumatised and needy children and this is how the Teddy Train started. Judy has given talks to the members of the Hereford community and worked alongside Ellie to arrange the shipping of the Teddies to South Africa.

Gavin Schachat of the Rotary club of Sea Point approached Wynberg Rotary club to help distribute the teddies. Gavin received 8 boxes of teddies and sent 2 boxes to Biffy at Wynberg to find suitable homes for the 90 teddies. 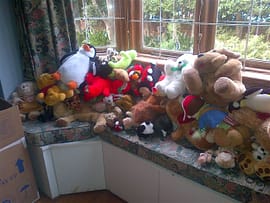 On Tuesday 11 June 2013 Gavin, Biffy and Pam started off at the Victoria Hospital Clinical Forensic Medicine Unit. Dr Marianne Tiemensma had approached Pam to see if we could do some painting in certain of the rooms.Biffy had approached the Rotaractors who were already onboard for this painting project.We had a quick look at what needs painting (2 bathrooms and the passage which serves as the waiting room) and then handed over 20 Teddies to Marianne.

Our next stop was Tenterton Place of Safety in Wynberg where 30 teddies were handed over. These children are placed here by the courts and being a government run institution are always in need of assistance.The Wynberg Rotaractors have worked here on a number of occasions.

Our next stop was the first of the CHOC houses in Plumstead who received 10 teddies.These are houses caring for children with cancer, mainly from out of town. These houses are in great shape but really appreciated the teddies.

Ever seen the moo-cows riding the Cape Argus and not known what they are supporting?They ride for CHOC.

The next CHOC house is in Bergvliet where they have more of the cancer transplant patients and another 10 teddies were delivered. Here whole or part of a family are accommodated and / or with the donor. They asked for any jigsaw puzzles and their collection of books was also scratchy. They were also very appreciative of the teddies for the children.

Our last stop was at Hope House who got the remaining 20 teddies. I had had a couple of calls and emails with them but did not know what they really did until I got there. It seems like an amazing setup which we can support in the future. They do all sorts of counseling on a donation basis or for free. They have over 40 staff and only 3 are paid. Most of their Counsellors, mediators and assistance offer their time free. They also treat addictions, offer courses/workshops, address the youth at risk, work in 2 schools and provide Mommy Bags for new mothers with nothing for their new-borns which is where the teddies will be added in.

All these places can do with more teddies in the future as they serve new batches of children.There are also the Police Trauma Units that could be supported with teddies.So there is going to be no shortage of places to support (depending on how much Ellie sends us and Gavin has for us to do a joint project with him).