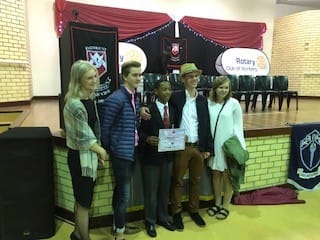 During the past week 4 Learners and 2 teachers of Haugaland Videregående Skole from Haugesund in Norway visited Cape Town as part of project Action South Africa.
END_OF_DOCUMENT_TOKEN_TO_BE_REPLACED 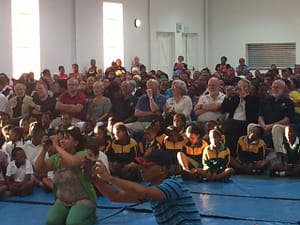 END_OF_DOCUMENT_TOKEN_TO_BE_REPLACED

On Wednesday November 6, Wynberg Rotary Club handed out 450 bursaries to children from primary schools and one high school in Grassy Park and Retreat.

The bursaries are funded by two sponsors in Norway Oddemarka Junior School and Haugaland College, who raise money through their Solidarity Day, when all the students go out and work for a day. The project was started in Grassy Park 14 years ago to help two primary schools with funding for computer equip­ment and books. The project, facilitated by Wynberg Rotary Club through the Norwegian Liaison Committee (NLC), has gone from strength to strength and now includes Montagu’s Gift, Perivale, Lotus River, Die Duine, Stephen Road primary schools and Fairmount High School. Over the 14 years, this school project has raised approxi­mately R4 million.

This was a special occasion for the recipients, the donor schools and Wynberg Rotary Club. For the first time all 42 teachers (including the principal) from Oddemarka visited South Africa, and Cape Town. They were joined by 4 scholars and two teachers from Haugaland, albeit in a separate tour party.

The week of 4 to 10 November was hectic for all the visitors. They toured the Western Cape, from Cape Point, through the wine routes, to Game Farms, Robben Island and Tablemountain. They stopped off at the Aquarium, the Waterfront, and Greenmarket square.

In their travels the party performed three very important functions: the reason for the visit.

In the evening of Wednesday 6th November, the whole group joined the Norwegian Liaison Committee and members of Wynberg Rotary Club at Hyde Park Primary to hand out the bursaries. It was a fantastic evening, enjoyed by all, especially the children.

On Thursday 7th November the party split up into 6 groups, each travelling with a member of Wynberg Rotary to a different school. There they spent two hours getting to know, and be known by, the principal, staff and in many cases enthusiastic learners.

Finally on the evening of the 7th the tour party joined Wynberg Rotary at Palms Guest House for their weekly meeting. It was a convivial evening, a few speeches, a good meal, much talking and making of friends.

On behalf of Wynberg Rotary Club we thank all members of Oddemarka and Haugaland, both staff and learners, for this fantastic, gift they brought to our Cape Town learners. We hope they took back many pleasant memories.