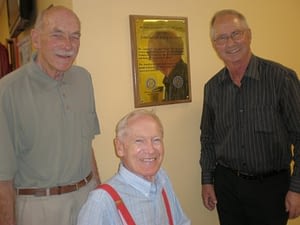 Born in the far south of Norway in Kristiansand, Are and his wife Wenche first came to Africa in 1973 where Are represented the Norwegian Government. They returned to Africa, specifically Zambia, in 1985, before heading south to Cape Town in 1992.

END_OF_DOCUMENT_TOKEN_TO_BE_REPLACED 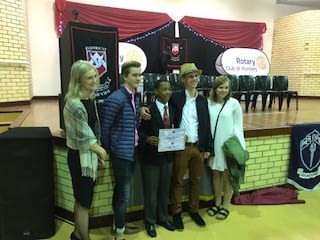 During the past week 4 Learners and 2 teachers of Haugaland Videregående Skole from Haugesund in Norway visited Cape Town as part of project Action South Africa.
END_OF_DOCUMENT_TOKEN_TO_BE_REPLACED

The Bursary Evening is one of the most important events of the year for the Norwegian Liaison Committee (NLC) of the Rotary Club of Wynberg.  Even more so, it is the highlight of the school year for 7 schools on the Cape Flats. On that evening, learners from 5 primary schools and 2 secondary schools are given bursaries to assist them to cover for expenses through their school year.

END_OF_DOCUMENT_TOKEN_TO_BE_REPLACED

On 9th October 2014 Wynberg Rotary had a ‘members evening’, an evening to celebrate US, who we are and what we do. It turned out to be a fantastic event, with a visit from an old friend, an induction, a re-induction, a certificate from a grateful recipient, and a new idea, a ‘Me-talk’.
[see also Wynpress Vol 66 Issue 13_16 October 2014 ]

Probably the most significant occasions at Rotary are the inductions of new members. Tonight we had two, or is it one and a half.?

The first was Keela o’Driscoll, ex Wynberg Rotaractor and long time friend. After many months waiting Keela finally joined us bringing another youthful element to the club, with prospects of many years Rotary service.

As for the second: John Vivian, a long time Rotarian and honorary Rotarian, decided that he was too active to be honorary, and wished to be re-activated. We welcome John back to the club as full, active member.

There were a couple of other membership changes. Ken WIlliams, a stalwart on any Youth Service resigned and the club was pleased to grant him honorary status. Ken gave a moving tribute to his wife Bertie, who helped out at any time of the day or night when people needed fetching, or feeding, or just company! We all thank him for his service over the years, and assure him the change in status is in name only.

Catherine Bailey from RC Taverstock, the daughter of retired member and friend – Peter Bailey – visited, and swopped banners with our president.

Are, the chairman of the NLC, passed around an award certificate presented to Wynberg Rotary Club by Perivale Junior School as part of their 50th Anniversary, in appreciation of the financial and other support given by the Club through the NLC.

And finally, Dirk, one of our newer members, gave a ‘Me-talk’. This is a new idea for the club, a member sharing tales about about their life, their loves, their career  and any other interesting information. Dirk set the bar high, with a most enthralling talk, and video, and song, and photo show.

A fitting end to an enjoyable evening.