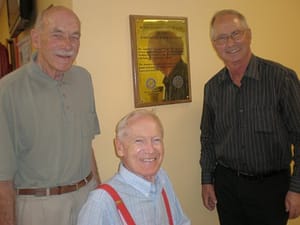 Born in the far south of Norway in Kristiansand, Are and his wife Wenche first came to Africa in 1973 where Are represented the Norwegian Government. They returned to Africa, specifically Zambia, in 1985, before heading south to Cape Town in 1992.

Are joined the Rotary Club of Wynberg in 1992, became President in 2001 and was subsequently awarded a Paul Harris and a Sapphire Pin.
As a result of having Are’s roots in Norway, contact was established between Rotary Club of Wynberg and Oddemarka Junior Skole in Kristiansand and Haugaland Videregaaende Skole in Haugesund. From the year 2000 to date, the students of these 2 educational bodies have raised funds, due to their own fundraising initiatives, on Norway’s National Solidarity day and these have been transferred to Wynberg Rotary Club for distribution. Are, as chairman of the Norwegian Liaison Committee (NLC), diligently guided and managed the spending of the funds received for the benefit of thousands of learners in the Grassy Park area.

Initially 2 schools, Stephen Road Primary and Montagu’s Gift were identified as beneficiaries and subsequently this grew to what is now 7 schools including Fairmount High, Die Duine Primary, Perivale Primary, Lotus River Primary and Zeekoevlei High.These 7 schools have over the years received nearly R 10 million of financial assistance in the form of computer equipment, laptops, printers, projectors, sporting equipment, upgrading of libraries, teacher training and bursaries for uniforms, books and school fees.
In 2007, in acknowledgement of all Are’s social upliftment work in South Africa, Are and Wenche back journeyed to their homeland where he was awarded a Norwegian knighthood, in person, by King Harald the 5th.
Over the years Are and Wenche together with the NLC and club members have hosted many of the students and teachers from the two schools in Norway. Are was always diligent in ensuring that well thought out programs were organised for these many visits and was meticulous in accounting for all the monies spent.

The Club will greatly miss this thoughtful, dedicated and diligent man with such high ethical standards whose personal efforts have contributed to the benefit of so many families in Grassy Park area and he will be appreciated and remembered for years to come.
A very special man!!
R.I.P Are.