Justin Schonegevel,a Wynberg Rotarian, and Lee Bergman, Wynberg Rotaractor, were presented with Citations for their exceptional dedication to the youth, at a meeting of RC Newlands Youth Services in September.

Justin Schonegevel : RC Wynberg
Past Rotaractor and now a Rotarian, Justin is the Adventures into Citizenship and Interact Training Workshop Champion, who has taken both these programmes to new heights and in so doing has fostered great working partnerships with RC Cape Town and Rotaract. Together these two leadership programmes oﬀered over 230 young people in Interact, this year alone, the opportunity to understand their roles in society and in Rotary. 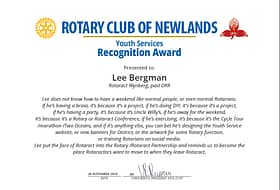